This Article was published in
www.independent.co.uk (Posted on Sunday, 18 Sep 2011)

One of the world’s leading Muslim clerics will issue a global declaration against terrorism at a speech in London on Saturday. Dr Muhammad Tahir-ul-Qadri will make the declaration at the ‘Peace for Humanity Conference 2011’ at Wembley Arena.

The peace declaration, which will call for an end to terrorism and for the protection of human rights in new Arab regimes, is expected to be signed by major religious and political leaders, including David Cameron and the Archbishop of Canterbury. Tariq Jahan, whose son was killed in the Birmngham riots, is also expected to attend.

The Pakistani scholar who lives in Canada is the founder of Minhaj-ul-Qaran International, a Sufi-based organisation that promotes moderate Islam. He issued a fatwa against terrorism last year and has since received death threats from many groups, including al-Qi’ada. A $10m bounty has reportedly been placed on his head.

The Muslim scholar has been running de-radicalisation youth camps across the UK, America and Europe for several years. He believes the declaration is urgently needed because he sees a growing number of young Muslims who could easily be swayed to extremism 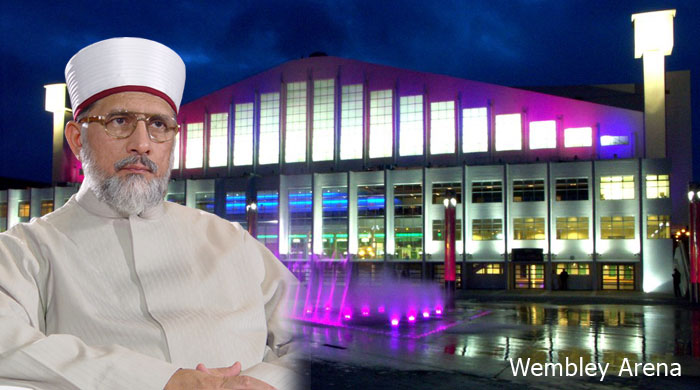 He said: “We want to give the message to the whole of the Muslim world and the youths who have been brainwashed that this is Islam and what it stands for: peace, harmony, tolerance, moderation and love and compassion for humanity. This message will go out all over the world, from coast to coast.”

He said the “historic document” was needed a decade after 9/11 to combat extremism and ensure the Arab Spring became an opportunity not just for democracy but also the upholding of human rights.

Outlining the content of the declaration he said: “Number one will be the absolute condemnation of terrorism; number two the protection of complete human rights, as it is seen in the Western world and endorsed by the United Nations”.

It will also call for “support for the concept of humanity and fraternity between all cultures, religions and human beings”; “democracy and good governance in the Muslim world” and “total ecological and environmental responsibility”.

“We want to emphasise education to bring an end to extremism, violence, hatred and racism,” he said, “To educate the Muslim people and youth and at the same time educate the West so that the hatreds are removed. We will be condemning every kind of racism and xenophobia and we will support all Muslims living in Western countries to have integration and citizenship and we will condemn isolation.”

The day will include what the group claim is the first collective cross-religious peace prayer instigated by a Muslim. The last collective peace prayer was called by the late Pope John Paul in Assisi a decade ago.

“Mankind is burning now in a fire of hatred and fanaticism and aggression and terrorism,” said Dr Tahir-ul-Qadri. “The peace prayer is another way to show that all religions can come together to pray for global peace.”

Dr Tahir-ul-Qadri believes it is essential to rebuild the boundaries between Islam, terrorism and politics. “I look around me and I see people are confused”, he said. “Extremists and terrorists have created a very big misunderstanding in the minds of generations. They have mixed up religion with international and political issues.

“My struggle is to differentiate between the issues – to take the political issues as a totally separate agenda that has no link with suicide bombing and these crazy activities,” he said.